From the Desk of Kristina Dietrick

From the Desk of Kristina Dietrick
President, HR Partners

Since I have been in the Human Resources field for over 25 years, it is rare that I learned 5 “new to me” items. I would like to share:

During FMLA leave, an employer may not require an employee to “stack” PTO and paid disability leave. 29 C.F.R. Section 825.207(d) states that because leave pursuant to a disability benefit plan is not unpaid, the provision for substitution of the employee's accrued paid leave is inapplicable, and neither the employee nor the employer may require the substitution of paid leave. However, employers and employees may agree to have paid leave supplement the disability plan benefits, for example, where a plan only provides replacement income for two-thirds of an employee's salary.

If a covered entity breaches HIPAA, there is a specific, timely procedure that must occur. The procedure may vary based on the amount of people affected by the breach, and it is important to confirm that no exceptions apply before initiating the procedure.

Step 1: Individual Notice - Covered entities must notify affected individuals within a reasonable time but no later than 60 days following the discovery of a breach of unsecured Protected Health Information.

Step 2: Notice to Secretary - In addition to notifying affected individuals and the media (where appropriate), covered entities must notify the Secretary of Health and Human Services when breaches of unsecured Protected Health Information occur. If a breach affects 500 or more individuals, notification must be within a reasonable time but no later than 60 days following a breach. If, however, a breach affects fewer than 500 individuals, the covered entity may notify the Secretary of such breaches on an annual basis. Reports of breaches affecting fewer than 500 individuals are due to the Secretary no later than 60 days after the end of the calendar year in which the breaches are discovered.

According to the Consolidated Omnibus Budget Reconciliation Act of 1985 (“COBRA”) coverage rules, if an employee is terminated from employment due to “gross misconduct” then the employer has the right to deny COBRA coverage for the employee and his/her qualified dependents. As a caution to employers, there is no definition for gross misconduct within COBRA, but the courts have previously relied on this two-part test:

Prior to June 2011, the Social Security Administration (SSA) issued blocks of social security numbers (SSN) based upon the estimated need for a specific geographical region. As a result, many SSNs were issued prior to the individual’s birth year (see chart). This may cause some confusion when employers request a background check and they note the issue date of the SSN is earlier than the candidate’s birthday. 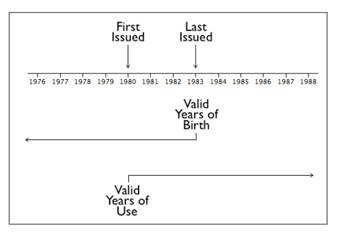 The SSA introduced a new assignment process in June of 2011 referred to as SSN randomization. This process eliminated the geographical significance of the first three digits, eliminated the significance of the highest group number, and allowed previously unassigned area numbers (000,666, and 900-999) to be available. This new method helps to protect the integrity of the SSA and extend the longevity of the nine-digit SSN.

We can all learn.  Keeping an open mind will get you there.

What our clients say...

"We have worked with Kristina and her firm on multiple occasions. Since we're too small to have an HR advisor on staff, we have relied on her expertise in reviewing our employee manual and other HR-related documents.

She has also been available for advice when needed. She's thorough, straightforward and focused on positive outcomes. I am always confident in her counsel."